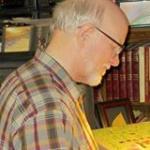 Philip Larson holds a life-long interest in mystery stories. He enjoys reading both the classics of the “golden age” (earlier 20th century) and books by modern authors. He began writing after retirement, and is currently on his fifth Jack Kellogg adventure. In addition to writing, he also does critique and editing in online critique groups. Most recently, he was a judge for a “mixed genre” short story contest.

He grew up in a southeastern Montana small town in the 1950’s. His first novel BENTEEN BLOWUP reflects his exposure to the attitudes and events of that time and place.

Further adventures take Jack into a mid-sized Montana city, then to a Nebraska college town, and in the latest mystery, the front range of Colorado.

The next mystery is currently begun, and will be back in the Nebraska setting.

“I think every fiction writer, to a certain extent, is a schizophrenic and able to have two or three or five voices in his or her body. We seek, through our profession, to get those voices onto paper.” – Ridley Pearson

A Story is a Promise Blog